Well what do you say about Sakhalin? (Letter Fifth – Kunashir Island, Mendeleev Volcano)

Morning of the second day on Kunashir met me fog. From the hotel window is clearly visible inner raid of South Kurilsk to which Japanese liner has moved. Not the best sign, especially considering that during the day earlier he stood at the external raid

Mendeleev Volcano is not particularly high – only about 890 meters. It is considered valid, despite the fact that the last eruption of this volcano was still at the end of the last century – in 1880. True, in the 20th century he has parried the inhabitants of the island weak attempts to show "end of the world", But then noise and emissions a couple did not go.

After breakfast, our group rushed on cars and we went to the road. This time, I had only a camera and a couple of the most common household gloves with me in the backpack. Why do I need gloves? It’s simple, a lot of letters of leaves are growing on the island, which is very tough and sharp, so you can easily post a hand.

But about everything in order, otherwise I have already started riding ahead.
So, for the beginning, we got along the highway until the 17th km. There begins the trail to the top of the Mendeleev volcano, or Mendel, as the locals call him.

See a white spot on the slope of the mountain? This is a fumeric field at an altitude of about 400 meters, the final item of our today’s travel. It so happened that the summand of Mendel was ordered. There are several reasons for this: the complexity of the passage of the last plot before the vertex, the presence in our group of obvious outsiders in our group (one lady was injured knee, well, and I with my own "bag of potato" on the stomach and sick back), limited time and weather (still the bloody-red sunset did not deceive about the cyclone approximation).

In order to get to the end point of the route we had to go around three kilometers in one direction on the old Japanese road. In the old days, the Japanese along the road landed a bambian. Bammouth is one of the most cold-resistant bamboo species. Grows into human growth, but at the same time it has a thin stem. And everything else, still firmly keeps. When climbing, if you need to grasp something, it is best enough to grab the stalks of the banma. In any case, my weight keeps once or twice.

Almost at the very beginning of the path there are wooden sleepers of a rail path, for which the Japanese rolled carts with gray

At the very beginning of the path, the height of the bambhooter is not higher than the belt

But he has one naughty feature – the letters of the bambhooter are very well kept moisture (dew droplets), and then no less well give it passing. But since I was walking first by closing (distracted by photographing), I didn’t get moisture.

At times, the path crosses the forest streams through which the safety cables are stretched for more convenient crossing

And in some places it passes and in the very real gati – logs laid through the bog.

According to our guides, if you step on a flipped soil next to the logs, then with a certain proportion of bad luck, you can stay without shoes. But it is at best. In worst. better not to think about it.

In general, the vegetation on the slopes is very diverse: the bambraught in human growth.

. and even relict tees whose age is just scary to say. Not to mention to grab it.

Dying through the bands of the banmafeught.. And on the other hand, it was possible to imagine the pioneer of the jungle, but there was not enough machete for a complete set.

I barely managed to catch the Landscapes in the lens

Here you can already meet a cedar slannik.

. and Hortensia, which grows simply here in the forest, and not in the parisades or in the flower beds

And so we got to another barrier, the last on our way – the stream, originating on the fumarol field

But we will not forcing it, but on the shore we will rise to the field. This is the last rise on our route. But he and the coolest.

Creek hot, which can be seen in the photo – couple over water. This stream is generally very picturesque. I could not resist the temptation and took a few pictures.

Last jerk, and so I find yourself on a fumarol field

Here is the beginning of the stream of sour, in which we bathe yesterday. It is powered by geothermal sources with a temperature of about 90 degrees. Water in sources sulphate chloride, silicon and strongly sour. Hence the name of the stream.

Fumarol – this is the source of hot gases and steam, located in craters, on the slopes and at the foot of volcanoes. The output of volcanic gas to the surface through fumarol is evidence of the transition of the volcano into intermediate between the eruptions or its final attenuation.

Here, as I already wrote, takes my beginning the stream of sour.

Unfortunately, this time I did not take a bathing accessories with myself, and in vain. Just below the mountainside there are small dams – bathing where it is quite possible to take a hot bath from this stream. It would be very cool in the evening to swim in the waterfalls in the valley, and the next day in the hot tub at the source. 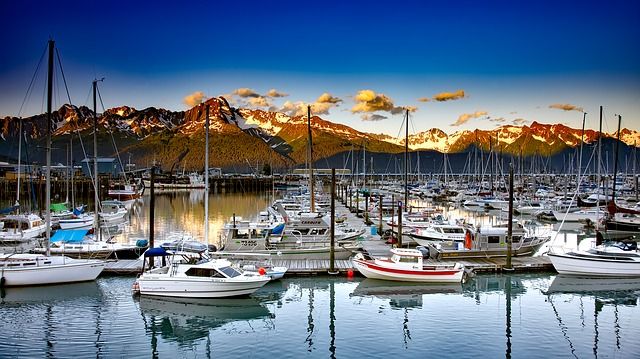 Meanwhile, sometimes due to the clouds shows the top of the Volcano Mendeleev

All over the field are scattered very large pieces of volcanic pumice, which gives the entire field an alien shade.

And here the bear is clearly visible from afar

And past this stone, I just could not pass. Well, judging myself: on the one hand, it’s just a sad physiognomy

On the other hand

No one reminds? And if you show this picture for comparison

And of course a few pictures of vegetation, believe it should see with your own eyes. Around all fumarole field, cedar slannik is growing, but in one place he is green, and in another. see what kind of yourself

Still, the bloody-red sunset gives herself to know, especially here, on the fumarol field: with quite comfortable weather, a very cold wind blew. But with this we easily coped. While tourists from our group wander around the field: filmed fumarols, bathed in a sour creek and just warmed on the stones (yes, stones most warm), our guides in a secluded place staged a small picnic with hot tea. I do not know how to other members of the group, but I personally have absolutely I did not want to get drunk in the will.

The expense was not as an example more pleasant and faster, which is not surprising: move from the mountains easier than climbing.

After dinner in the House of Friendship, all members of our group decided to go to the local culture house for a free concert of the group "Rostov" As part of: Assators Sagillians (ex-soloist of the group "Cascade") and Oleg Rings (ex-soloist group "Blue berets"). Their performance was campaigning, since on September 13, the elections of the governor were supposed to be held in the Sakhalin region.

Honestly, I was more than surprised to come to DC: a pretty big room, comfortable chairs, a large screen, good sound equipment. All this somehow not knitted me with the concept "Normal rural club". During the speech on the screen, fragments of video from the concerts of the group were shown. But most, personally, I struck the performance of the song "Leaving", written in the conclusion of Soviet troops from Afghanistan. It was very unusual to see the elderly man’s microphone – the Assatura of Sagyrian, whose performance was complemented by video recordings of the same song with a young soloist group "Cascade" Asvatur Sagyrian (please forgive, but the best photo could not be found)

After the concert traditionally evening gatherings in the hotel lobby "Flagship".

So passed my second day on the island of Kunashir. Tom and complete today’s story,