Monday we now have a day off. Today is dedicated to Mexico City, walking around the city. Rather, I walk on the areas where I was not yet. Sheboldasik something has already managed to see while I was on my ears in work. So today I am Andriusks, I speak in the role of commentators.

Discovered something new in the subway. For example, that there are also such stations, very colorfully painted.

Monday we now have a day off. Today is dedicated to Mexico City, walking around the city. Rather, I walk on the areas where I was not yet. Sheboldasik something has already managed to see while I was on my ears in work. So today I am Andriusks, I speak in the role of commentators.

Discovered something new in the subway. For example, that there are also such stations, very colorfully painted.

Day we started from the university town, before which I had a couple of dozen stops to drive just on the subway. It seems like an hour-peak was, 9 in the morning, but they drove without adventure, even had time to take off on the road.

At the metro station "University" we were met by such Pinocchio. What they mean, we are unknown.

The university town is very large and on its territory you can find everything that some sideways refers to study. Each faculty has its own letter. This, for example, at the entry to the legal entities (Justice).

Very well maintained, purely, cozy. A bunch of cars – it is not clear whose, or students, or who else. Although, full and official parking lots.

Thickets Favorite Flowers Pokeshontas, which she loves to take pictures. Well, at the same time 🙂

You know, whose bust meets students, teachers and a couple of our tourists at the Faculty of Biology? That’s right, Darwin.

I thought everything was serious here: throughput, security and other obstacles for those who are not related to the university. AN-No, anyone can walk here. Even at the lecture, you can, if you do not stand out from the crowd. The photo is just an educational building with lecture halls.

I didn’t think that someday I would be in some Mexican University. Saw an open audience and, as usual, did not restrain, went to lay. The last time on the chalk board I wrote more than ten years ago, when I studied at the Institute.

Obviously, not all students come here on cars. For bicycles its own parking.

People on numerous lawns are preparing for classes, reads books, draws something, and sometimes engaged in gymnastics. Guess what the guy does lying face down.

Another faculty. Know what. What are the ideas that starts on the letter "A"?

Light study! Even for theatrical "fighters"!

Apparently, it was not possible to decide which urn to throw plastic plates with glasses.

Climbed into some kind of building overlooking the town. Well, as on the town. For a couple of other buildings and on the room, outside very reminding East Hamam. The same idea of ​​lighting the room, only here are just glazed holes in the ceiling, and not convex lenses, as in the east.

Pokalontas could not pass by the flower beds. Again flowers. Oh, these women;)

Mexican version "Burlakov on the Volga". Who is here with a mosaic amateur? Benladovna? What? In general, it looks like on old Soviet buildings.

Not study, but solid flour. Remember the fairy tale about the little flour? Now we know where he studied.

Perhaps the most famous building in the town of Town – Library. On an amateur. Again mosaic, but the form of the building somehow negates all the efforts of artists. Apparently, the architects had his own view of the world, clearly parallel and perpendicular. Maybe even in the soul they were kubistami!

You do not think bad there, a person in the photo simply expresses his attitude to a combination of mosaic and the form that she gave her.

– Huang that you today at the lectures about the uncertainty of Heisenberg told? What do you think, give a quantum physics exam? – EEE.. Well, Lupita, there are only two options: either pass, or do not pass.

From afar it seemed to me that here something in Thai is written. AN-No, recently.

Very comfortable thing. If you were lost, I got lost, it’s enough to find such a point and get up to the center. All now you know exactly where you are! In the center of the point!

Somehow I started to forget what the our letter looks like "NS". Everyone thought, first: and from where Mexicans know about this letter? Second: what she means here? Later, Pokalontas reminded me that the our letter "NS" deployed. And truth.

Viveos Park (Viveros), another epic with squirrels. This time we prepared and teased by their nuts. Rather, Kormili. Pokeshontas here was already today led me to introduce me to them.

Today we were looking for her favorite, black. I did not understand if she was.. Maybe painted, Melting did? Somewhere appeared reddish color. Although, last time she has not bitten as a finger. Maybe, "barbell" infected?

For those who are too lazy to curranet the video (lower), the summary of all episodes: so we fed them. I felt my grandfather mazay, saving hares. Or rather, Santa Claus: invited one knees, asked to tell the rhyme and handed the nut.

Proteins – amazing creatures. In essence, natural rats, but such charming! Case in tail?

After the park went to show me the most famous street in the Koyoacan area – Francisco Sosa (Francisco Sosa). They immediately stumbled upon some open doors with something multicolored inside. I wonder what’s inside? The entrance revealed guards that we were asked to register, we recorded the magazine and went. It turned out that the building has some kind of concerts and here are some concerts.

Common Crane Design in Public Places. The principle of operation is the same as in domestic "our schools": I clicked on this pipple below, the water flowed. That’s just the water pressure here much more, so the jet goes not down, and the coupe fell. As a result, the view after visiting the restroom is as if there was a strong counter wind.

Musicians did not find it, but they met some installations, something clearly symbolizing. For example, a guitar suspended on numerous wires. What is it for?

Ouch. Flower. Let me remind you, the phone-photo camera was in the hands of Sheboldasik. 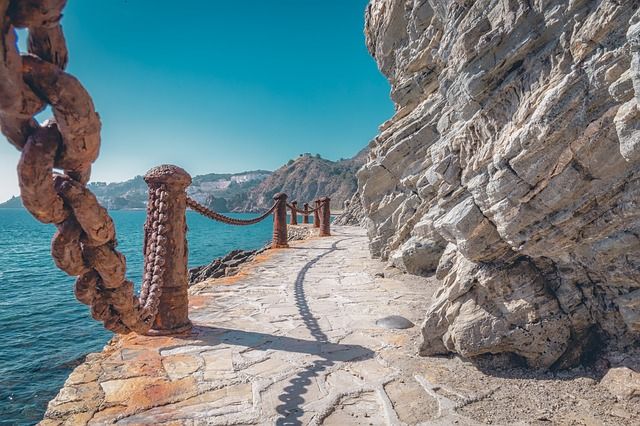 Saturated, is not true? If someone paint a house in such colors in the our outback, it will certainly be deemed for the crazy. Here it is normal.

Straight mexican. But it is not clear to me that this is a month – two lips or two eyes? Or there are some other options?

Green fence. That’s what she really is! Stone and greens – an optimistic combination, is not true?

Do not believe, but these are live flowers. Some kind of perfectly right shape, everything is like on the selection.

If you saw some kind of icon or simply the image of a woman, similar to this – Do not doubt, her name is Maria. Fully – Maria Guadeloop.

Would like to live in the house painted in such colors? By the way, I wonder how he would look in winter when everything is black and white around.

Beetle of the day. Classic, yellow.

I remembered the brilliant logo of the Lyzhana store in Kaluga: http: // StandardTools.RU / images / kaluga1.JPG Kaluzhan, this store is still alive?

During the walk, they looked into the house in which some Morelos had ever lived. So, pictures on the walls of his house are very impressive. What is just a lady with a clip.

Some artists have a very peculiar look at the perspective. They see her somehow in their own way. There is something to see. Looks like something on the White Temple in the Thai Province of Chiang Rai.

Again coitot and moon. And why they always together?

Cucmok, Koyoacan. The wall is all thrown out, but behind the plate is followed. Even collided blue to be pretty.

Whether the bar, or a restaurant. I even wonder – all his signs draw (write) on the walls, because it is impossible to do something differently? Or because just so accepted? Or everything is so conscious that they understand that it is terribly beautiful?

Yuliya? You and not learn in makeup!

Probably something sick. Put such a thing so as not to be. I sympathize.

We wanted to take a walk in one our yet, but we would not have time. Returning home, we still buy coffee, dry cream with sugar and to do "Neskafa 3-in-1", according to which Pokalontas sometimes misses. Finally, we saw our own eyes that in the subway really in the peak hours, several cars are soldered specifically for women.

Friends, I have long wanted to ask – whether we are much laid out a lot of photos? There are enough patience to browse them? Continue in the same vein or be more laconic? For example, I can select the phone-camera from Pokalonas when she sees flowers. Or I can hold back when I meet the next beautiful "beetle". Do not be lazy, write in the comments, we still try for you here.